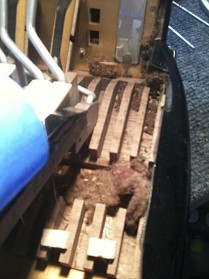 I bought my first used accordion from the great Frank Marocco.  It was an old Hohner 30-FS which I quickly grew out of and sold on eBay.  Frank laughed when I told him that I made a $200 profit on his accordion. Some though are shocked to hear that I sold Frank's old accordion.  But, the truth is that Frank's old Hohner is not as valuable to me as the memories that I have performing with him.  I don't need his old accordion to remind me of these things.  Plus, I needed an accordion that was able to perform TODAY, not in 1964.

I remember asking Frank to sign that accordion and he said that he never heard of such a thing.  I've seen many great guitarists sign guitars for people, so for him to sign an accordion was no big deal to me.  So, Frank signed the accordion and shortly thereafter, many of the accordion manufacturers started to release "Signature" models of their accordions again.  Speaking of "Signature" models of instruments, if the artist physically signs the instrument, it's pretty cool I guess.  But if it's a printed copy of the artist's signature on the top of the instrument, it's more marketing than anything.  In fact, I personally don't care for anybody's name on the top of any instrument except the builder's name.

Anyway, since that first accordion, I've played, owned, repaired, and tuned almost every vintage accordion that you could possibly name.  I've been through so many accordions that I can't even remember them all.  I have pictures of a great majority of them though.  And, I do remember many of the key design features of certain accordions that I liked and disliked.  I appreciate high quality construction with good reeds but I dislike HEAVY accordions.  Usually, the heavier the accordion, the more lack luster the sound because everything is built too thick.  It's like pushing sound through a brick wall.  Anyway, I get deeper into these things in Accordion Building 101.

Whenever I browse the completed listings on eBay, I see 30, 40, and 50 year old accordions for almost the price of a New one which is astonishing to me.  I personally REFUSE to keep ANY old accordions in my possession.  I don't need them and I don't want them.  Life is too short to mess around with something that doesn't perform.

Anyway, since I've been involved in music, musicians have always been interested in older instruments.  Old guitars, violins, pianos, saxophones, and other instruments have been well sought after by musicians all over the world.  The saying is true that "one man's junk is another man's treasure."  And I DO believe in possibly owning a few collector's pieces but the PRICING of them is usually a big problem in our greedy world today.  Too much money is being taken exploiting people's appitites for these old instruments that mostly underperform a New one.  I personally prefer to own, practice, and perform on ONE New accordion that does everything without issues.

So, what I would like to focus on here is your personal everyday instrument.  The instrument that YOU practice and perform with.  The instrument that becomes a part of YOU.  We're not talking about something that you keep in it's case for "show and tell."  I'm talking about YOUR signature instrument.  I personally don't need somebody else's "vintage" instrument to feel good about myself or about my music.  I'm pretty sure that Stan Getz's Selmer tenor saxophone was BRAND NEW when he started playing it.  I doubt that he started honking on somebody else's 'hand-me-down' saxophone.  I'm sure that B.B. King's many "Lucille" guitars were brand NEW too.  And he probably changed them out often.  Ultimately, REAL musicians, SERIOUS musicians, cannot fart around with old instruments.  We need the BEST thing available for the here and now.

Now, unlike a guitar that has just a few moving parts, accordions have hundreds of moving parts and hundreds of things that can go wrong with them in time.  The older the accordion, the more likelihood there is that problems will exist, problems that the serious musician does not have time for.  This principle applies to ALL of the accordions ever made, both the amateur AND the professional models.  The simple fact is this, the BEST vintage accordion cannot compete with the BEST new accordions built today, no way Jose.

Some have been told by hustlers of "vintage" instruments that these old dogs are the "best."  But, if you take the best of the old accordions apart and compare them piece by piece with the best of the NEW accordions, there is no comparison.  It's like saying that automobile building simply stopped making progress many years ago, it's crazy talk.  As an example, imagine a 1966 Corvette racing around the slalom against today's Corvette. The New Vette would utterly DESTROY the old Vette on the racetrack.  In fact, even a 10 year old Corvette will get beaten by a brand New one.  The same principle applies to the TOP accordion builders from yesterday and today.  This does not mean that the '66 Vette doesn't possess some serious coolness and value.  What it means is that you're not going to take it to work in rush hour traffic EVERY day.  Instead, you need a modern machine that outperforms the old machine on a day-to-day basis.

In my very straight up opinion, the old accordions are good for two things, the person on a budget OR for firewood.  If you are a person on a serious budget, we are unable to sponsor you with a new instrument but I can help you with some very useful information on finding a well priced used accordion.  Below are some numbers for you to kick around.  Some internet hustlers may not appreciate these numbers but feel free to use them to your advantage.  If you pay MORE than the eBay HIGH prices listed below, you're probably paying way more than necessary for a used accordion.  If the person selling the accordion sounds like they inherited it from a relative or snagged it at an estate sale, go for the lower prices.  If the person seems experienced and restores the old accordions, paying a higher amount might be worth it.  Treat this as a GUIDE, not as an absolute.

(*Depending on the brand and model.)

If you desire to pay more than $3,000 for a double tone chamber accordion on eBay that is over 15-20 years old, you are torching your money in my opinion.  I see guys spending $5,000 to $10,000 on 20, 30, and 40 year old accordions on eBay and I feel sorry for them, especially the Brazilians.  You could spend $7,000 to $8,000 on a brand NEW Maestro with a double tone chamber and handmade reeds that YOU break-in!!!  Why spend that much money on an old USED accordion?  Because your friend told you that it was good?  Because your favorite musician is playing this brand?  I've repaired them ALL and don't believe the hype on ANY of these old accordions.

When you break-in a NEW accordion, YOU break-in the reeds, YOU break-in the bellows, YOU break-in the keyboard, and YOU break-in the bass mechanism instead of some other sweaty slob doing it for you.  Who knows how many potholes and curbs that this 40 year old beast has been dragged over in it's case.  Or, how much hard pushing and pulling, dirt and dust, bumps and bruises, and scratches and sweat that it had to endure over the years.  If a new accordion is simply out of your budget, you can use the above mentioned price guide as a solid reference.  But if you're driving around in a new Lexus and honking on a 50 year old accordion every day, you need a New instrument.  Think of it as an investment in YOU.  The last five NEW accordions that we sold went to people in their 70's, 80's, AND 90's who were sick and TIRED of playing these old beast accordions.

Many accordion players that I come in contact with have NEVER even owned or experienced the feeling of playing a NEW accordion every day.  The feeling is similar to trading in that junky old car and getting behind the wheel of a brand NEW car.   The weird sounds, the big tuning problems, the old fashioned keyboard, the big size and weight, the stink, and the DEAD sound that your poor ears have gotten used to is all GONE!!!  Now, you have an accordion that is not drudgery to play but one that you're thinking about all day, one that you can wait to get your hands on.  This is the feeling that you'll have with a NEW Maestro.  Help to support the people that love to design and build the accordion with a genuine passion for the PLAYER.  You can read more about the build and the quality of the Maestro in Accordion Building 101.﻿