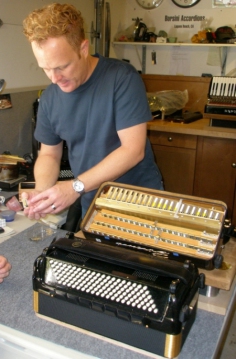 After repairing and tuning hundreds of accordions, I've learned that most accordions are simply out of tune.  WHAT???

Why are all of these accordions out of tune??  Well, if you take your standard 4/5 reed accordion with 41 keys and 120 basses, here's how many reeds we've got to deal with:

Now, compare these 448 reeds with the 6 strings on a guitar, there's a LOT of room for error with the tuning of an accordion.  Couple this with an accordion that's 30, 40, or 50 YEARS OLD that has NEVER been tuned since it's creation at the factory.  You get the picture.

When the reeds are initially made, they are basically designed to carry a certain pitch.  Many times the reeds are pre-tuned before they're installed into the accordion.  Then, possibily a "good" manufacturer will tune the entire accordion AFTER the reeds are installed.  This is one of the many reasons why a NEW accordion generally has better tuning than an old one.  Everything is New and basically in tune.

As the years pass, the reeds, leathers, and wax starts to age and fatigue.  Even the woods used in some of these accordions starts to warp which affects everything, the sound, the tuning, the compression, ect, ect. Although pretty on the outside, an old accordion starts to fatigue and loosen up and the tuning goes away with it.  And as the tuning fades, the player gets used to the SOUND of the accordion and only notices when the accordion is out of tune with ITSELF.  That's when they come to us and request a "spot tuning" which is usually code for, "I play professionally (grin), but I'm too cheap to buy myself a NEW accordion, or to pay for a REAL tuning job."  And these people claim to be "serious" about playing the accordion!!!  If you're serious about your playing, get your accordion in tune.  And if you're SUPER serious about your playing, get yourself a brand NEW instrument already.

Considering this "spot tuning" thing, a true "spot tuning" would apply to fixing a few notes on an accordion that has been properly tuned recently.  If you have a couple of "notes" that sound out of tune on a 50 year old accordion that hasn't been tuned since it's birth, the tuner would have to cheesily tune those notes back to the bad tuning of the entire accordion.  As an example, let's say the "C" in the middle of your keyboard is "out of tune" in the Master setting.  That means that 1 or more of the 8 reeds on that "C" note in the LMMH is "out of tune" with the rest of the box.  The tuner then starts "robbing Peter to pay Paul" in order to make the thing appear to sound "right" to the player.  Better it would be to get the ENTIRE accordion IN TUNE.  But, if everything is aging inside, the mechanical part of the accordion would need to be fixed FIRST, before any real tuning is done.

It would be like wanting to tune-up a 1960 Ferrari.  Yes, it's a Ferrari but you aren't going to be doing much "tuning" until all of the parts inside the engine are working properly.  The same is true with an old accordion that is no longer mechanically sound.  If you tune an accordion that isn't mechanically sound, even the best tuning job won't last too long.  This is why it is important to have the accordion gone through mechanically before any professional tuning is done.  Most times, the fixing of the mechanical issues will help the overall tuning of the accordion.

Due to the mechanical problems that start affecting accordions over time, I personally have no interest in owning or playing an accordion over 10 years old.  If the accordion is in pristine condition, I could go 20 years here.  And this is why "most" of the TOP players in the world (and I mean the BEST of the BEST) are playing NEW accordions.  They simply do not want the hassle of dealing with an old and quirky accordion.  It would be like Michael Schumacher competing in a modern Formula One Grand Prix with a 1960 Ferrari, he'd get blown off the racetrack.  Like new and old racecars, the accordions are no different.  Aside from forming an attachment to your old instrument, most of the people that would disagree with me are the hustlers that are making big money selling these old accordions.  You can read more about this fiasco in my "shocking" blog New Accordions vs Old Accordions.

Since most accordions out there are simply out of tune, the sound of the accordion leaves a bad taste with those that have to listen to it.  Piano players get their pianos tuned regularly and accordion players must do the same. Do it for the music!!!  Also, bad choices in the music played compounds the issue and makes the accordion less desireable to people.  I dabble into this touchy subject in Revelations in Accordion Music & Performance.

So, let's say that your accordion is in decent shape and you're ready for some real tuning.  You need to find a person that actually tunes accordions.  Remember that any Tom, Dick, or Harry can buy a fancy tuning machine and set it on a bench.  All the tuning machine does is tell you if a particular note is in tune.  It does NOT tune the accordion for you.  It does NOT touch the reeds for you.  Now, some guys are pulling out the reed blocks and tuning the reeds outside of the accordion.  This is not the best tuning method but it is OK for a cheaper accordion.  Most guys are self taught or taught by others that were self taught.  This is okay too as long as the tuner is gentle and meticulous with the scratching of the reeds.  Unless you're working on some huge bass reeds, a Dremel tool should NEVER be used on the reeds.  This is the mark of someone that doesn't know what they're doing.

Back to these tuning machines.  Vincenzo Borsini who is in his 80's is one of the top tuners in Castelfidardo.  He can tune an entire accordion with one pitch fork, and he doesn't even need it.  He usually uses a cheap little digital tuner if he requires it.  So, don't be fooled by fancy tuning machines.  It's the hands that do the work. And proper tuning takes TIME.  This is why good tuning is expensive, it's meticulous and time consuming.

Some may have an accordion with an overall tuning that sounds sharp.  Most Americans desire a 440 tuning which puts their accordion in perfect tune with the band.  In Europe, the players like their accordions tuned to 442 or 443 so that they are able to stand out from the band.  Many of these accordions that were tuned for Europe have ended up here in the USA.  And this may be a reason why your accordion sounds sharp, it may be tuned to 442 or 443.  In such a situation, tuning DOWN is easier than tuning UP.  But, it would be better for reeds that were fabricated for 442 to remain at 442 in my opinion.  Tuning them down to 440 is possible but not recommended.  It would be better to keep the original tuning of the accordion.  If it bothers you, dump the old accordion on eBay and get yourself a new Maestro which will be tuned at 440 for Americans that prefer to play WITH the band instead of on TOP of the band.

Ultimately though, tuning is like saying, "how much air do you want in the tires of your car?"  I've seen plenty of people buy a JUNK accordion simply because they liked the tuning.  And I've seen people pass up a FANTASTIC accordion simply because they didn't like the tuning (too wet or too dry sounding).  Most accordions with just one middle reed such as LMH will be straight tuned.  But, if you have an accordion with at least two middle reeds like LMM or LMMH or LMMM, then you have some options for the tuning.  And it's just tuning.  The build of the box is way more important folks.

Now for the million dollar question, where should I go and how much should it cost to tune my accordion?  First, you should go to someone that is reputable and as close to home as possible.  This gives you a more hands-on relationship with your repair person.  To send your accordion to Italy or across the country is overkill.  The shipping is expensive and it may do more harm to your accordion than good.  The accordion could be perfectly tuned by your tuning guy on the west coast and then it arrives at your home on the east coast out of tune due to all of the bouncing around during the shipping.  The shipping chain even with "Air" transportation includes trucks, warehouses, and guys with forklifts that could care less about your fancy accordion.  Many of the accordions that we receive for repairs were damaged on airplanes.  Anyway, you could start your search for a good tuner by contacting one of your nearby Maestro Dealers.

The pricing varies from place to place and by the tuner.  If your guy is tuning the reed blocks on the OUTSIDE the accordion, the tuning job should be quicker, easier, and less costly.  If he is tuning the entire half of the accordion on the tuning bellows, this will be a more accurate and costly tuning.  If you're not a serious player, go with the most affordable and reliable person that you can find.  If you're serious about your instrument, you should be playing a newer accordion and it should be tuned by a well trained professional.  As noted, shipping should not be an option unless you are unable to find a reliable person that is close to home.

I hope that this information is useful to you.  If you have any questions, please feel free to contact me HERE.