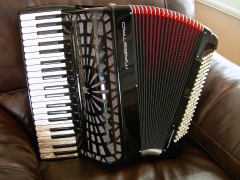 Well, what do you expect to read here that you don't already know???  Me, Cory, and Steve (most of you folks know who I'm talking about) have argued this point a plenty.  Forget THEM, here's what I think!!!  : )

Actually, I like BOTH "accordions" for different reasons.  Deep down I'm a purist.  I'll take a real saxophone over one that I can play on the right hand of a digital accordion.  I'll take the sound of the air blowing through a physical reed over something that was digitally sampled.  Yet, no one can deny that this digital thing is some great technology which is probably here to stay.  And if the big money keeps funding this technology, it could put a lot of acoustic accordion manufacturers right out of business.  This is why the builders of the acoustic accordions must band together and build the best quality possible at realistic prices.  Most guitar players own an acoustic AND an electric guitar so there's no harm in owning both types of accordions for different reasons.

One thing that I like about the digital accordion is the option to play any type of digital sound on both hands of the accordion.  And the sounds coming from these boxes are becoming more and more realistic.  Yet, when I see somebody strolling in front of a cafe with a digital accordion, I think of Star Trek, not Paris.  I think of the Holodeck, not a cafe table on the Champs Elysees with an espresso in one hand and a baguette in the other.

As an example, once I was at the French festival in Santa Barbara, CA and up walks a Mexican band in FULL costume cruising the place for tips.  When I saw the guy playing the digital accordion, I just couldn't take him seriously.  He might as well have been wearing a light saber as well.  I put an acoustic accordion on this guy's shoulders and his face lit up.  His playing lit up too.﻿  This is just an observation from my "biased" point of view.  A point of view that has watched well trained artisans build an acoustic accordion with their bare hands from a piece of wood.

Another thing that I've noticed is that many that play the digital accordion actually forget how to use the bellows on a real accordion.  Many of the digital players have no power on an acoustic accordion.  Yes, they can do the runs and arpeggios but the feeling and the breath needed to play a REAL accordion seems to be lacking.  This is the type of expression that people want to hear and feel when they see the bellows of a real "accordion" start to open.  I believe that the technology is improving which is making digital accordion "feel" more realistic which is good for those that use it often.

I'm sure that the people who are building these things are working on options to incorporate and mix the digital sounds with the acoustic accordion.  This is a better option for people that want both sounds.  And some of the acoustic manufacturers are joining forces with the digital accordion simply because they see the writing on the wall for the future.  But, like a computer, tablet, or smartphone, anything electronic has a shelf life.  And these things are built to be changed out over and over again.  Look at the old Cordovox!!!  Nobody wants that beast anymore.  But, a good acoustic accordion could go 50 years or so.  One thing I have noticed though, every time there's a new digitial accordion coming out, the acoustic accordion sales suffer.  And this is no good for those that spend their entire lives, even to the point of losing fingers, building beautiful acoustic accordions for people.

Now, as far as the SOUND of the straight digital accordion goes, I've been playing music with real instruments for over 30 years.  I ripped apart vintage Marshall amps for guitarists that are crazy about their sound.  I sat in the studio with most of Sinatra's last big band.  I performed with the great Frank Marocco.  And my opinion is...that the SOUND (not the features) of the digital accordion leaves much to be desired.  Yet, I just saw a video demo of the latest digital accordion and I was impressed with the improvements made to the sound.  Is that statement politically correct or what???

Another big lure to the owning of a digital accordion is the expanded ability to be a "one man band."  But realistically, seriously, how many one man bands actually sound that good?  Yes, it's fine for a restaurant that can afford only ONE musician but you're not going to be filling concert halls with one man bands anytime soon. The problem is that the one man band is always using too many mental resources in order to "attempt" to sound like a full band.  The result is usually a big failure in my opinion.  And many times it's difficult for the one man band to keep good time which affects the music.  Listen to the TIMING of the next digital accordion player that you see and you'll know what I mean.

Many acoustic accordion companies are attempting to price their cheaply built boxes in the range of the super quality instruments such as our new Maestro.  Buyers though are becoming more saavy about the building techniques which is forcing the acoustic accordion market to price their instruments properly.  Unfortunately, there is not enough competition in the digital accordion market to force realistic pricing.  And this is usually the case with the first of any type of technology.  I'm sure that the first digital wristwatch was a breakthrough but today the true connoissuer is wearing something with sweeping hands made in Switzerland.  I believe that the day is coming when the digital accordion will be appropriately priced at about HALF or a THIRD of the price of a handmade acoustic accordion.

Anyway, if you think differently, who cares what I think.  You go do what makes you happy and maybe one day they'll make this digital thing something to be reckoned with.  Much of the music that you hear on the radio and in the movies is done with digital sampling so anything is possible.  For me, I'd rather hire a great bassist or drummer or guitarist to make some real music together.  This is more appealing to my sensitive ears.  And if the budget requires that I play alone, I'll use one of these two FANTASTIC computer applications:

1) For figuring out music and practicing, I use the excellent "iRealPro" application on my Apple devices.  Pay for and download ALL of the extras that are offered with the app.  You could use this program for your backing tracks too.  This is a very inexpensive program that has it ALL.

2) To create even more incredible backing tracks I use the awesome "Band-In-The-Box" application for the Apple or PC.  If you go this route, purchase the $569 version which contains REAL recordings of musicians playing through the changes.  The program is shipped with it's own monster hard drive which is filled with incredible REAL sounds.  Your SOUND using this program will blow away any digital or midi accordion in my opinion.

There are two disadvantages of using backing tracks.  Firstly, you may not get the respect of the closet music purists that are sitting there criticizing you for having the guts to play solo for them.  Secondly, you don't have the flexibilty to continue a song if you're playing at a polka dance or something.  But who cares, the song ends when the song ends.  Just start up another one, no big deal.  There are thousands of songs to play.

Both of the above mentioned programs could easily replace your digital or midi accordion.  I use these programs INSTEAD of digital or midi as I play solo four nights a week in the restaurants.  By using backing tracks I'm able to focus on what I'm doing instead of focusing on what an entire BAND should be doing.  And I can play every acoustic instrument in the band too but what would that prove besides NOTHING.  I'm entertaining people as they eat dinner, it's not a concert backing up Bocelli.  My setup is my acoustic accordion, a very small amp, and my iPhone which contains my tracks.  ONE trip from the car and it sounds better than any digital or midi accordion in my opinion.  Feel free to come and visit me if you want to see and hear it in action.

Ultimately, there's no harm in owning BOTH types of accordions but my MAESTRO acoustic accordion is the first thing that will be in my hands.